You and Me – Little Soldier Productions 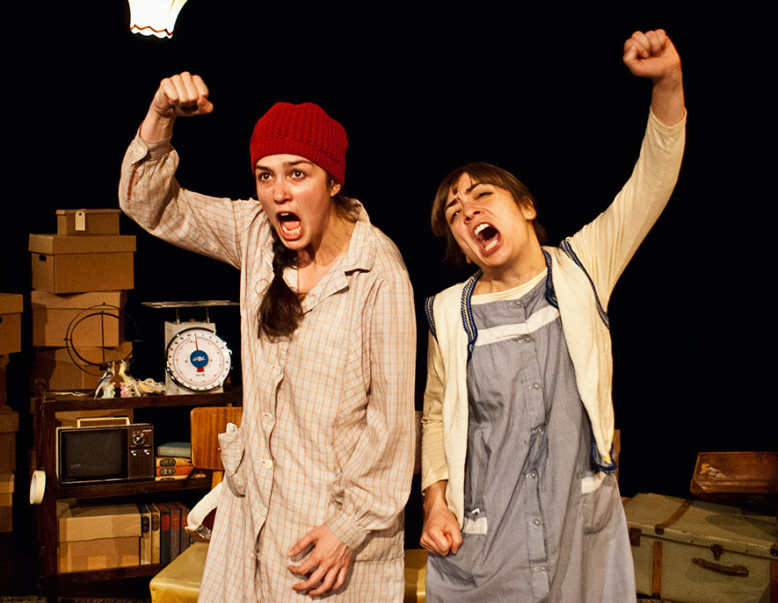 Founded by award-winning performers Patricia Rodríguez and Mercè Ribot, Little Soldier use elements of physical theatre and improvisation to create highly participatory productions that are emotionally rich and slyly humorous.

Winner of the Argus Angel Award at Brighton Fringe, ‘You and Me’ is a funny yet touching story which explores old age with humour, imagination and tenderness.

Two elderly sisters live in a foreign land against the backdrop of a battered rug and a mountain of mysterious boxes. They share an existence of outrageous defamation, tender reminiscing and pure madness, careering between affection and annoyance. But is their behaviour just eccentricity or something more destructive?

You and Me is based on original script ‘Tu i jo’ by Roger Simeon. Adapted and directed by BBC performing arts fund winner Bryony Shanahan, the show opened at Rich Mix in 2012 and enjoyed a successful month run at the Blue Elephant Theatre. In 2013 ‘You and Me’ has toured the UK and was presented at PAM Festival (New York).

‘A masterpiece. Stellar performances. The best of the Fringe’ |The Argus (Brighton Fringe)

‘Refreshingly different. Character acting at its best.’ ★★★★ Everything Theatre

8.00pm Live in Concert in The Barn

Dila V and the Odd Beats

A hip-shimmying blend of Turkish folk, irresistible Balkan dance beats, rebetiko and bolero rhythms, and other tasty world flavours. Fronted by Dila Vardar and Djanan Turan, this Bosphorus-straddling group has come together over a number of years, pulling together some of the most talented Eastern folk musician in London. They have released an EP and have played at a whole host of fabulous festivals (Bestival, Smugglers Records Festival, Shrewsbury Festival) and venues around the UK in the last year, together with appearances on television.

The Shoreham Midsummer Festival creates an event which celebrates art, music and nature. We value everything local – skills, food and drink – while promoting personal creativity, hands-on fun and artists from all over the UK and beyond!